Phx.Gen.Auth is a great authentication solution when building out Phoenix applications. I’ve previously gone over some options for customizing the functionality and workflow around Phx.Gen.Auth. Today we’ll look at how we can restrict user registrations via a registration token.

Note: I’m not a fan of “flexible” solutions unless there is a use case to support the flexibility. Adding extra scenarios because “you might need them” is a great way to add extra code, effort and bloat. If your requirements are more locked down I’d suggest a targeted approach. For instance if I only needed email scoped tokens, I would not implement non-email scoped tokens.

Anyway, enough preamble, let’s get down to some code!

First off let’s create a new Phoenix project. I’m using the latest and greatest version of Phoenix, Phoenix 1.6 (which of this writing is in release candidate mode but seems super solid, see this post on the Elixir forum for further information on 1.6 and the release candidate. A simple mix archive.install hex phx_new 1.6.0-rc.0 will install what you need. If you are on an older version of Phoenix, you’ll need to install Phx.Gen.Auth as a dependency via your mix file as it was only merged into Phoenix as of version 1.6. There will also be some other minor differences you’ll encounter especially around templates as 1.6 introduced heex templates.

Note: add a --live flag to the above if using a Phoenix version older than 1.6. 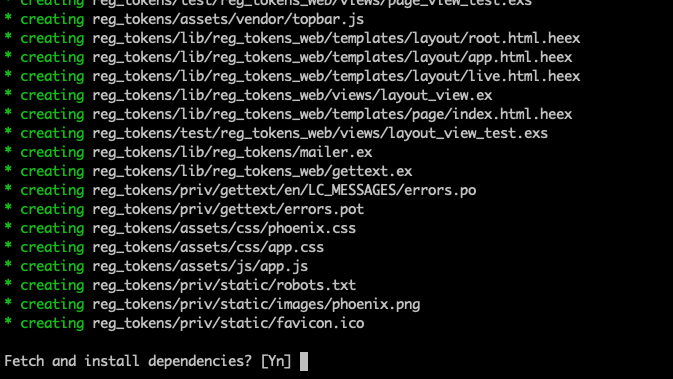 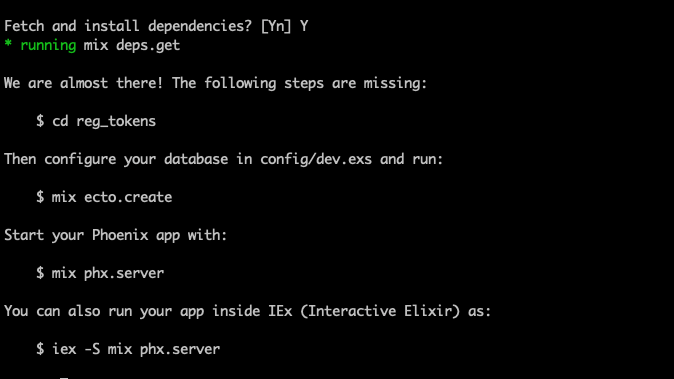 Now we can change into the directory where the application was created and build our database. 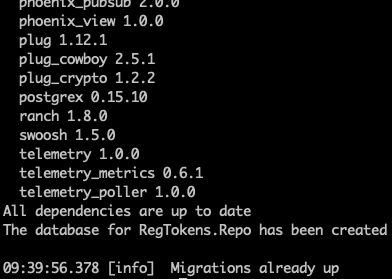 Next we’ll generate the authentication code. 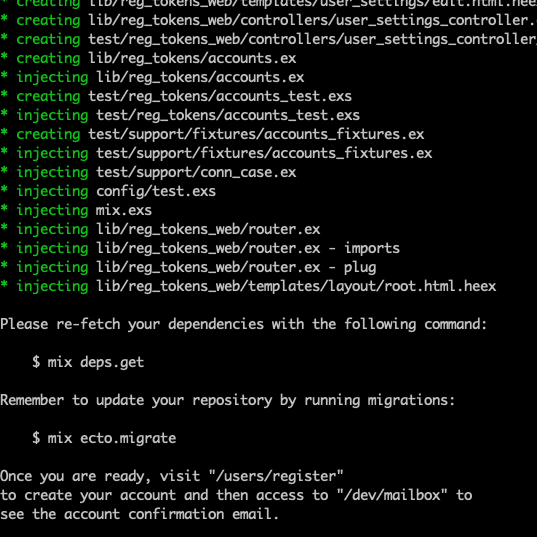 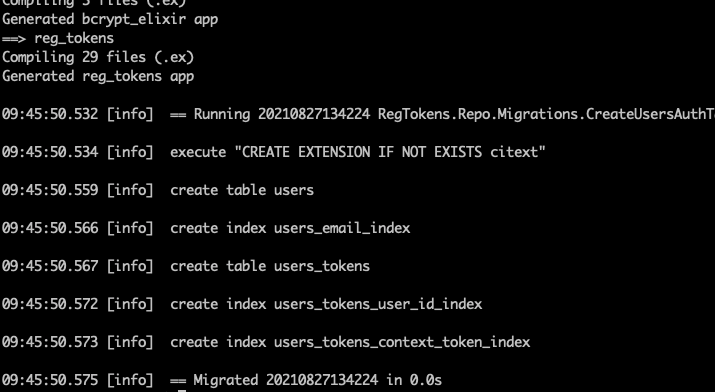 Finally let’s ensure all our tests are running out of the gate.

Great! Everything is looking good, we’re ready to make our changes to the registration workflow. We’ll start off with the backend changes.

Updating the backend to restrict registrations

Starting with the data layer

Since we’ll be requiring a token in order to register, we need somewhere to store registration tokens. There is already a user_tokens table that gets created as part of phx.gen.auth.

We could look to re-use and augment this table to also work with registration tokens. I think it’s going to make more sense and be easier to create a specific table for the registration tokens however… so we’ll need a migration for that!

The contents of the migration will be as follows.

Pretty straight forward. We’re using a UUID for the actual token value / column. And we’ve created a used_by_user_id column and a generated_by_user_id column which have references back to the user table. These will contain references to the user who generated the token (if applicable) and the user who registered with the token. Then we have a scoped_to_email column for the scenario where we want to restrict the token to a particular email address. Everything is nullable other than the token column.

Finally we have a unique index on the used_by_user_id column as a user’s registration should only ever be associated with a single token.

And now we can create the schema file.

That’s it for the data layer… let’s start building out the context functions.

We need two things out of our context; the ability to generate registration tokens and the ability to register a user with a token. Since the second of these two options requires a token, let’s start with figuring out how to generate that token.

This is pretty easy. We’ll add a new alias and function to the existing accounts.ex context module.

We’ve added the RegistrationToken schema to our list of aliases… and now for the generation function:

Simple! We’re passing in our optional values (the generated_by and scoped_to_email fields) as a keyword list. This works great as Keyword.get returns nil when the key is missing from the keyword list… which is exactly what we want to insert when these fields are not supplied.

We create a map from the opts parameters:

… which we pipe into a changeset function (RegistrationToken.create_changeset), the result of which gets piped into Repo.insert.

All standard stuff, we need to add the changeset function referred to above to registration_token.ex.

All we’ve done is add a new import for Ecto.Changeset and then a simple changeset function:

We cast the two fields we expect in the attrs map, and then explicitly generate the token UUID value via put_change and UUID.generate. We’ve also added a foreign key check for the generated_by_user_id as we want to return an error if the user id for the generating user does not exist.

Let’s give it a spin, we’ll fire up iex.

… and generate some tokens.

If we want to create a token with a generated_by value, we’ll first need to create a user.

Then we can create a token with a generated_by value set to the id of the above user.

Great, everything seems to be working and if we look at our data with something like TablePlus we’ll see the 3 tokens we’ve created.

iex is a super convenient way to test drive functionality while building things out but we’ll definitely want to write some tests… let’s tackle that next.

Just like the implementation, the tests will be pretty straight forward.

Pretty self-explanatory, we’re testing the various token options and ensuring the token is created with the expected values… and we have a test to make sure the generated_by foreign key constraint is acting as expected.

Let’s make sure everything is passing.

Onto the registration function.

We have the token generation part of our registration workflow done and dusted, now we need to register a user with a token. We’ll create a register_user_with_token/2 function in accounts.ex. We’ll build this function up bit by bit, starting with the top level function and filling in the supporting pieces as we proceed thru the explanation.

The function above maps out the basic workflow of the registration functionality. The first thing we check is that the token is a valid UUID by calling into Ecto.UUID.dump. If the token isn’t valid we can stop processing right away and return an error changeset (which we build in the invalid_token_response function). If the token is a valid UUID, the next step is to retrieve the token, we then pipe the result of the retrieval into maybe_register_user_with_token. This is what performs the actual registration.

Let’s continue by filling in the code for the scenario where we have an invalid UUID. We need to implement the invalid_token_response function, it looks like:

We create a changeset and manually add an error to indicate the token is invalid.

I’ve chosen to return a generic invalid token message as part of the changeset, but depending on your front end requirements you might want to return specific messages around specific failures or even return specific error tuples. For instance instead of returning a changeset, you could return something like {:error, :invalid_uuid}. This would be useful if you want to provide more detailed information around what went wrong to the caller of the registration function.

So with the above in place we’ve covered off the scenario of an invalid UUID. If we get past the UUID check, the next step is to retrieve the token from the database via get_registration_token/1. Let’s implement that next.

Ok, nothing exciting to see here, we’re just making use of a query function we’ll add to registration_token.ex that gets piped into a Repo.one call. The query function looks like:

This is pretty simple, we are querying for a token with a UUID that matches the UUID passed to the function. Then we check the token has not expired and hasn’t been used. I’ve settled on an expiry of 30 days but depending on your use case and especially if you are going with non-email scoped tokens you might want to tighten up the expiry period.

We also need to add a Ecto.Query import at the top of the file.

Let’s get to the implementation, we’ll tackle the above cases one by one.

The first case is simple. If we don’t retrieve a token from get_registration_token we know either the token doesn’t exist, is expired, or has already been used. We pattern match on nil as the token’s value and send back an error changeset via invalid_token_response.

The next case is a non-email scoped token.

Again we use pattern matching to determine that we have retrieved a token… but it is a non-email scoped token (i.e. via %RegistrationToken{scoped_to_email: nil}). We then use a transaction to register the user and consume the token. If for some reason either of these operations fail we perform a rollback. register_user/1 already exists, we’re just re-using the existing registration function from Phx.Gen.Auth, we need to write consume_registration_token however.

Simple! Just a repo update with some help from a new changeset function we’ll create in registration_token.ex.

Nothing complicated, we set the used_by_user_id value to the id of the created user and perform a unique constraint check.

That’s it for non email scoped tokens, the final case to handle is tokens scoped to an email.

Very similar to the non-email scoped version of the function. The only difference being we have a surronding if statement that ensures the registering user’s email is the same as the email in the token. The Repo.transaction blocks are the same in both places, I thought about creating another sub function to remove the duplication but felt it read better having the transaction blocks inline.

Let’s give our code a spin in iex.

The output looks as expected.

Sweet! Looks like things are working, feel free to run thru some other scenarios with iex such as mis-matching email addresses… all of which we’ll be tackling in our tests.

To accomplish this, we need to:

Finally we won’t bother testing the happy path scenario as we’ll do so in subsequent tests.

To achieve the above, replace the current register_user/1 describe block with the following:

We’re making use of a new fixture function during the test setup (registration_token_fixture), so we need to add this to accounts_fixtures.ex.

Let’s make sure the account tests are still passing.

Nice! Next we’ll add some tests for non-email scoped tokens.

This is largely the same as the previous describe block, this time we’ve just added a test for the scenario where the registering email address does not match the email address the token is scoped to.

Awesome, all good! This closes out the backend changes required for the new registration workflow.

I was hoping to get everything done in a single go but this post is starting to get long… so we’ll handle the front-end changes in an upcoming post.

Todays code is available on GitHub, you can grab it via:

Thanks for reading and I hope you enjoyed today’s post!