In our last post we set up some code hygiene tools and for the most part got everything configured and working the way we want. Today we’ll take a closer look at Boundary.

If you followed along with part 1 you can continue with the code from there. Otherwise you can grab today’s starting off point by:

Now you can install the existing dependencies, and set up the database.

What does Boundary actually do?

Before we get started with some code, let’s figure out what Boundary actually does. Based on the documentation some examples of what you can do with Boundary:

So there are a number of things you can do with Boundary, and a lot of it has to do with ensuring we have some structure and rules around how our modules interact with each other.

For our application, we’ll enforce that the Web layer can only call into the backend via the main CodeHygiene module. I like this convention as it makes it very easy to see what your application’s API is; you don’t need to look thru a bunch of context modules. The drawback to this approach is you can get a pretty big main context module. I find this can be somewhat offset by delegating to sub modules.

Another convention we’ll adapt is using a separate top-level schema namespace. This is based on the excellent series of posts by the author of Boundary Saša Jurić. This means instead of the somewhat awkward convention of MyApp.Widgets.Widget, we’ll instead have MyAppSchema.Widget.

So to see this in action, let’s create some code!

As per the output, we’ll add the necessary routes…

… and then run migrations.

We’re already seeing a bunch of Boundary errors popping up, we’ll ignore them for now and make sure our new Products page is working.

If we navigate to http://localhost:4000/products it looks like we’re all good.

So we’re now ready to fix up those pesky warnings.

The reason we’re seeing some warnings is we already set up some Boundary rules in our first post and the scaffolding code is violating those rules. Specifically the controller code is calling directly into the Products context module where-as we’ve specified everything needs to go thru the main API module (i.e. code_hygiene.ex).

So the first step is to delegate those calls thru the main API module.

Delegating all front-end calls thru the API

So now we just need to replace the web calls that are currently running thru CodeHygiene.Product.something() to the API function, i.e. CodeHygiene.something().

The above will take care of almost all the Boundary warnings, we still got the Product schema popping a warning however.

To get rid of this we need to set up the schemas as a top level namespace.

The final step in getting rid of our warnings is to move the schemas into top level modules.

So we’ll create a top level lib directory for our schemas and move over the existing Product schema file.

The only change we need to make to product.ex is the namespace.

Here we’re saying the schema module doesn’t depend on anything… and exports the Product schema.

The final bit of code to close out this change is to update any references to the Product schema module to now point to the new namespace, i.e. CodeHygieneSchema.Product instead of CodeHygiene.Products.Product.

With these changes lets see where we are at. 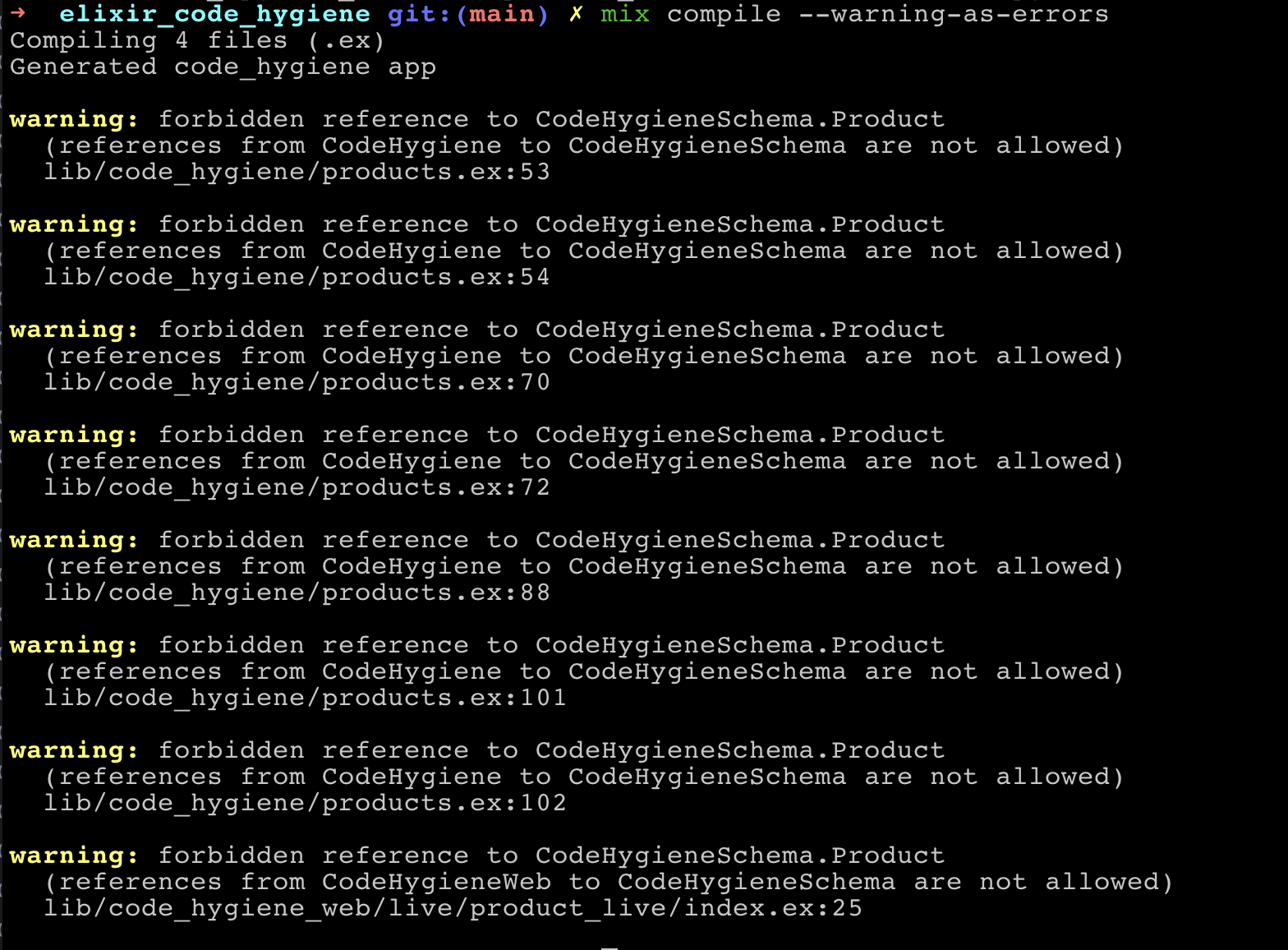 Oh no, we’ve gone backwards, even more errors than before!

This is easy enough to fix however, the piece we are missing is to indicate that our API and Web layers have a dependency on the schema layer. We can do this by updating the Boundary statements in code_hygiene.ex and code_hygiene_web.ex.

We’ve successfully enforced some boundaries around our code and for any new sub-context modules we simply need to defdelegate the sub-context calls thru the main API. For any new schemas we add we need to update the exports list in code_hygiene_schema.ex.

I usually add Typespecs for the functions in the API module… so before moving on, let’s do so.

First we need to add a type for the Product schema.

And now we can add specs to code_hygiene.ex.

What about generated code we want to keep as is

As mentionned previously I typically don’t use the scaffold generators so unlike in the last section I would just add new functionality / code that conformed to the Boundary rules right off the bat; but what about a situation where we want to use some code generators and not mess with the generated code? A good example of this would be the mix phx.gen.auth command which adds authentication to a project.

Although we could update the generated code to conform to our Boundary rules like we we did with Products; we might prefer to keep the authentication code as is; doing so will make it easier to apply any updates that might be applied to the Phx.Gen.Auth. Let’s see how we would do this.

We’ll start by running the generator:

And do as we are told: 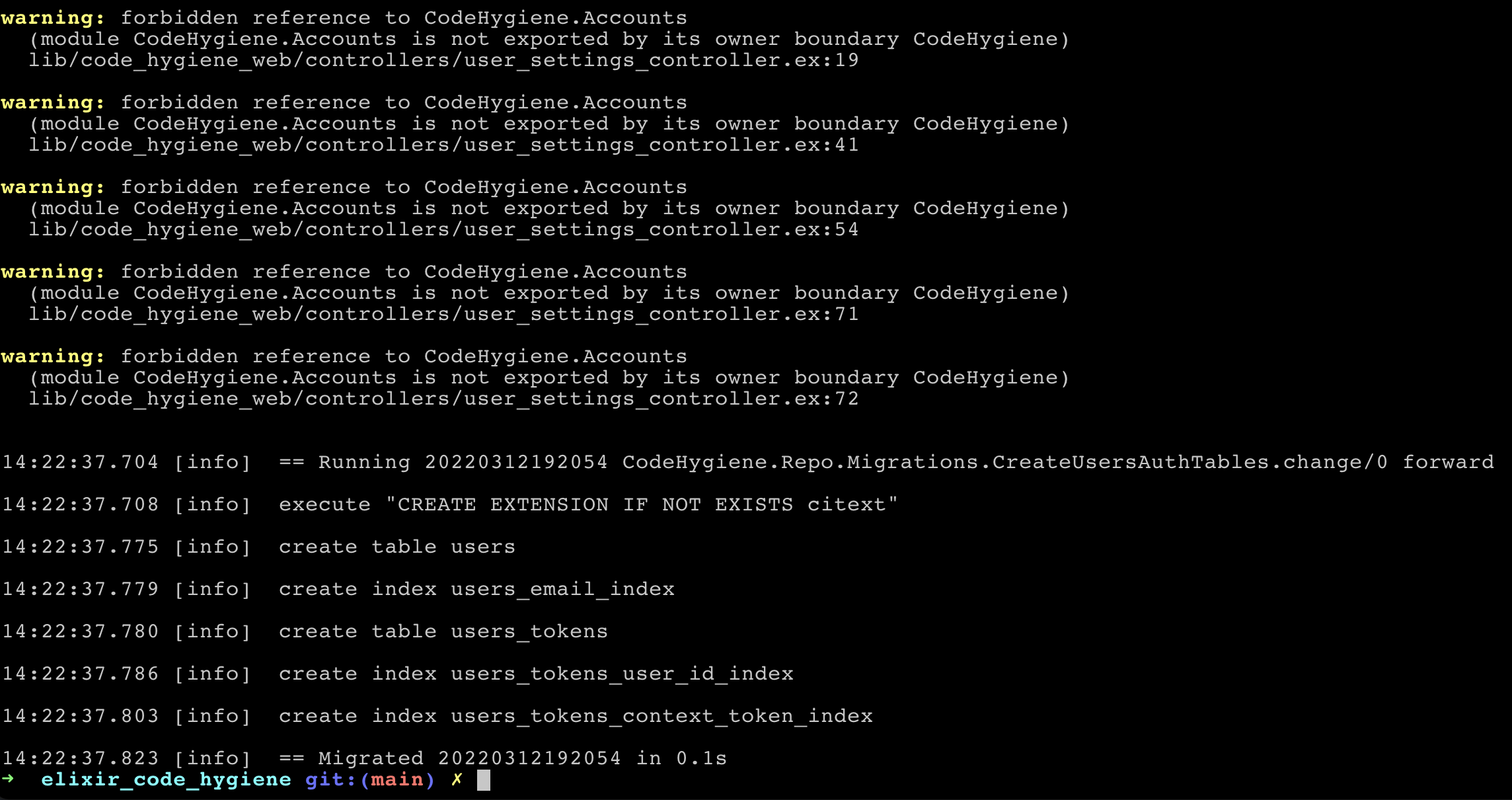 Just like when we generated the Product scaffolding we immediately see some Boundary warnings.

It is super simple to get rid of these warnings however, we just need to export the main phx.gen.auth context module (accounts.ex) and the schema (user.ex) in our API module:

And we’re all good!

However what happens if we run our tests?

We see we’re getting a warning, this is because the test fixture files are under the core CodeHygiene namespace and thus fall under our Boundary rules for our main context module.

To alleviate this, I like to move the fixtures into their own namespace (CodeHygieneFixtures) and in the fixture modules disable the Boundary checks with use Boundary, check: [in: false, out: false].

Let’s apply these changes to the accounts_fixtures module.

We now have to update all our tests to refer to the new fixture namespace. I’ll show one example:

We also need to change the register_and_log_in_user helper in conn_case.ex.

Now if we run our tests, we won’t get any warnings!

So that’s it for today. We saw how we can use Boundary to enforce some rules around the way our code interacts with itself.

Next time out we’ll look at the final piece of the puzzle which is ExDoc. We already have ExDoc included as part of our project… but with some customizations we can improve the utility of the documents being generated.

If you want to retrieve the GitHub commit that corresponds to today’s code: